McCarthy tapped Reps. Jim Banks of Indiana, Jim Jordan of Ohio, Rodney Davis of Illinois, Kelly Armstrong of North Dakota, and Troy Nehls of Texas to serve on the panel.

Banks will serve as the committee’s ranking member. Jordan has been a Trump firebrand in Congress, often haranguing witnesses and criticizing Democrats during high-profile hearings.

House Speaker Nancy Pelosi, D-Calif., announced her appointments to the select committeeearlier this month, including several Democrats and Republican Liz Cheney of Wyoming, who was ousted as chairwoman of the House Republican Conference after she spoke out against Trump and fellow Republicans over their false election fraud claims.

Rep. Bennie Thompson, D-Miss., who serves as chairman of the House Homeland Security Committee, will chair the select committee. Thompson negotiated a bill that would have established a bipartisan commission to investigate the riot. The measure passed the House along party lines but was ultimately blocked by Senate Republicans.

The other Democratic members of the House select committee, which will have the power to subpoena witnesses and documents, include Reps. Adam Schiff of California, Zoe Lofgren of California, Pete Aguilar of California, Stephanie Murphy of Florida, Jamie Raskin of Maryland and Elaine Luria of Virginia.

Pelosi has a veto over McCarthy’s picks, as they have to be made in consultation. However, she has not signaled she plans to turn down any of his members.

The committee’s first hearing is scheduled for July 27.

The Democratic-controlled House on Thursday approved a wide-ranging bipartisan defense policy bill, despite strong opposition from a conservative wing of the Republican party.

The 316-113 vote in favor of the $768 billion defense measure came after lawmakers spent hours debating hundreds of amendments. The bill, which guides Pentagon policy and covers the fiscal year 2022, is roughly 5 percent more than the previous year’s bill.

It provides automatic pay raises for U.S. troops, funds the branches of the armed forces, veteran health care, and authorizes other military programs, among other measures.

The bill, which is reauthorized annually, typically passes with broad bipartisan support. But a day before the bill’s passage, the House Freedom Caucus urged the Republican party to oppose the measure because of an amendment that would allow the registration of women for the Selective Service System, which was approved with bipartisan support while the bill was in committee.

The House Republican Conference had signaled its support for the bill — known formally as the National Defense Authorization Act — in a memo Monday.

Rep. Alexandria Ocasio-Cortez, D-N.Y., was one of many lawmakers who introduced an amendment during the debate on the House floor. Ocasio-Cortez’s amendment aimed to reduce the price tag of the bill by 10 percent. However, it failed.

Earlier Thursday, the House also approved a bill to provide funding for Israel’s Iron Dome aerial defense system after it was removed from the broader spending bill. The vote — 420-9 — came after some progressive Democrats, including Ocasio-Cortez, raised objections to the $1 billion cost. Overall, eight Democrats and one Republican voted against that bill.

The Senate has already passed the measure, which now will go to a conference committee to resolve differences.

A congressional committee investigating the deadly Jan. 6 attack on the U.S. Capitol issued subpoenas on Thursday to some of former President Donald Trump’s closest advisers.

The committee demanded the former Trump aides and allies give their sworn deposition to the committee on Oct. 14 and 15, according to letters released by the panel. It is also asking for documents, to be submitted by Oct. 7, related to communications involving the president on Jan. 6 and the days before the pro-Trump mob stormed the Capitol building.

In the letters, the committee said Meadows and Scavino have significant information regarding the president’s actions on Jan. 6. Patel, the panel said, has information regarding the security planning among Department of Defense officials and the agency’s coordination with the White House. The panel said Bannon, who left the White House in 2017, was in Washington, D.C., on Jan. 5 allegedly trying to persuade unnamed lawmakers to block the election certification and in communication with the president through the presidential election.

A representative for Meadows declined to comment. Representatives for the other three men did not immediately respond to a request for comment.

The panel noted that reporting indicates that Scavino was with Trump on Jan. 5 during a discussion on how to convince lawmakers not to certify the election for Joe Biden. Prior to the Trump rally on the day of the attack, Scavino also promoted the event on Twitter, encouraging attendees to “be a part of history.” Meadows, the panel said, reportedly communicated with officials at the state level and in the Department of Justice “as part of an effort to overturn the results of the 2020 election or prevent the election’s certification,” the panel said.

The panel was formed by the House in late June with virtually no Republican support. Reps. Adam Kinzinger, of Illinois, and Liz Cheney, of Wyoming, who was ousted as chairwoman of the House Republican Conference after she spoke out against Trump were the only Republicans to vote in favor of the committee and both have been added to the panel. 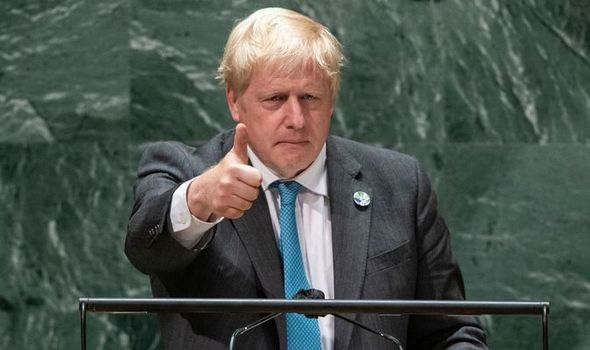 BORIS JOHNSON’s speech to world leaders at the UN General Assembly on Thursday has been welcomed by a climate change expert, despite the bizarre reference to Kermit the Frog.

You can now get paid in bitcoin to use Twitter