In an exclusive interview with Andrea Mitchell, Secretary of State Antony Blinken discusses his approach to the troop withdrawal from Afghanistan, negotiations with Iran, admitting refugees into the U.S. and revitalizing partnerships around the world.May 6, 2021 WASHINGTON — Ahead of a highly anticipated meeting with Russian President Vladimir Putin, President Joe Biden agreed Sunday that U.S.-Russian relations are at a “low point” and said he was open to a prisoner exchange with Moscow in an effort to clamp down on cybercrimes.

On the first international trip of his presidency, Biden spoke at a press conference marking the conclusion of a meeting of the Group of Seven nations in the United Kingdom, where the wealthy democracies put out a statement challenging Russia and condemning Chinese human rights abuses.

Biden will meet with Putin Wednesday at a villa on the shores of Lake Geneva in Switzerland — neutral territory for two leaders who do not want to show any deference to the other — where they are expected to discuss a range of issues, including Russian-based cybercriminals and ransomware attacks that have crippled some U.S. cities and infrastructure.

“Let me make it clear. I think he is right it is a low point,” Biden told reporters of Putin’s recent assessment about the Moscow-Washington relationship. “And it depends on how he responds to acting consistent with international norms. Which in many cases he has not.”

The FBI and other Western law enforcement and intelligence agencies have blamed criminal syndicates based in Russia for a string of recent cyberattacks, including the one last month on a pipeline that supplies much of the fuel to the East Coast.

Putin said in an interview with Russian state television that he would be open to extraditing Russian criminals to the U.S. if Washington agrees to reciprocate. Biden said Putin’s comments were “potentially a good sign of progress” and said he was open to that deal, though he seemed to express doubt that there were any criminals in the U.S. perpetrating crimes against Russians.

“If there’s crimes committed against Russia that in fact are — the people committing those crimes being harbored in the United States — I’m, I’m committed to holding them accountable,” Biden said.

U.S. Secretary of State Antony Blinken told NBC News’ Andrea Mitchell in an interview Sunday that Biden will confront Putin on cyberattacks in their meeting.

“He is going to make clear that no responsible state can be in the business of harboring criminal enterprises engaged in cyber attacks, including ransomware. That’s very much gonna be part of the conversation,” Blinken said.

“We’ll respond forcefully, as the president has already demonstrated with the response to the SolarWinds cyberattack,” Blinken continued about the hacking of companies and federal agencies. “So I don’t think we’re gonna get a clear and definitive answer from from one meeting. But it’s the start of testing the proposition of whether Russia also seeks a more stable, predictable relationship or not.”

Biden’s tone was a marked departure from the credulity and warmth former President Donald Trump showed toward Putin, whom he defended during a 2018 meeting in Helsinki even after Trump’s own intelligence agencies said Russia and Putin had meddled in the 2016 U.S. presidential election.

“President Putin says it’s not Russia. I don’t see any reason why it would be,” Trump said, siding with the autocratic foreign leader over the U.S. government’s analysis.

In a statement ahead of Biden’s trip last week, Trump asked Biden to “please give (Putin) my warmest regards” and defended his “great and very productive meeting in Helsinki.”

Biden and Putin will hold separate press conferences after their meeting in Switzerland, a sign of the chillier relationship between the two men.

“This is not a contest about who can do better in front of a press conference,” Biden said, defending the decision not to appear alongside Putin. “It’s about making myself very clear what the conditions are to get a better relationship.”

But Biden said there are opportunities for cooperation with Russia, such as on stopping ransomware attacks and in providing humanitarian relief to global conflict zones where Russia has sway, such as Libya and Syria.

“There’s a lot going on where we can work together with Russia,” Biden said. “Russia has engaged in activities that we believe are contrary to international norms, but they’ve also bitten off real problems that they’re going to have trouble chewing on.”

Biden said democracy is at risk around the globe and democratic counties need to pull together to defend it. “We’re in a contest not with China per se, but with autocrat,” he said.

Biden’s comments came on the heels of G-7 meeting — which includes the U.S., Canada, France, Germany, Italy, Japan and the United Kingdom — that concluded with a statement calling on Russia “to stop its destabilizing behavior and malign activities” abroad and specifically mentioned the need to “urgently identify and disrupt ransomware criminal networks.”

It also warned China about its “non-market” international economic policies and urged Beijing “to respect human rights and fundamental freedoms, especially in relation to Xinjiang,” where the local Muslim population has faced repression.

In an interview with NBC News, Putin said that while Trump “is an extraordinary individual,” he could work with Biden as well.

“That’s a different kind of person, and it is my great hope that, yes, there are some advantages, some disadvantages, but there will not be any impulse-based movements on behalf of the sitting U.S. president,” Putin said of Biden. 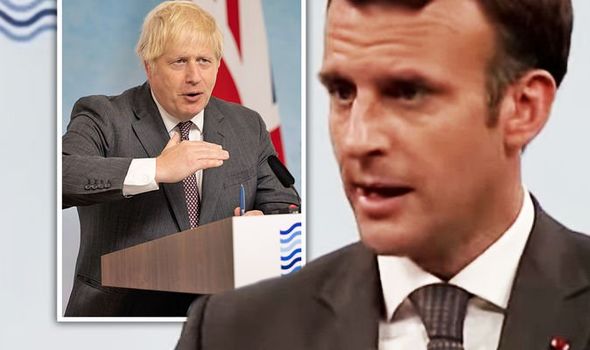 EMMANUEL MACRON has told the UK to calm down after tensions over a Brexit row Northern Ireland overshadowed the G7 summit in Cornwall. 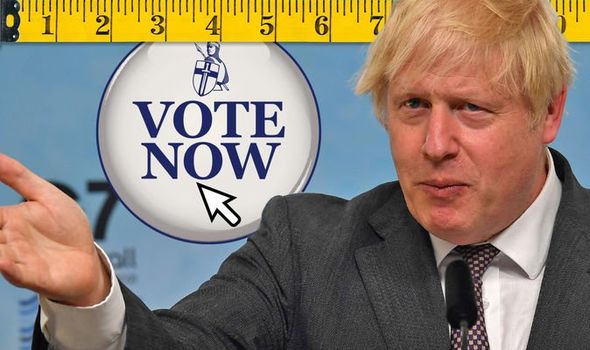 THE GOVERNMENT has confirmed it will consider using post-Brexit freedoms to allow greater use of traditional measurements such as pints, ounces and yards. But do Express.co.uk readers think Boris Johnson should introduce imperial measurements now the UK is out of the EU?

'Get with it!' George Galloway eviscerates lefties obsessed with EU

Brexit POLL: Should Nigel Farage be honoured for 'services to EU exit'?

Boris hits out at Biden: Tells president keep nose out of Brexit 'with greatest respect'

Biden and G-7 leaders wrap up summit with promises expected on Covid, climate and China