President Trump on Friday unveiled his so-called “Platinum Plan” at an event in Atlanta, which is aimed at investing $500 billion in Black communities.

Trump did not disclose how the plan would be funded but that it would boost lending to Black-owned businesses, reduce taxes, and also include education, healthcare, and criminal justice reforms. He also said the plan would make Juneteenth, a holiday celebrated by Black Americans that marks the end of slavery in the U.S., a national holiday.

He said that the plan would focus on the prosecution of the Ku Klux Klan and antifa as well as designating the groups as terrorist organizations, and make lynching a national hate crime.

“When I ran for president four years ago, I looked at the shameful record of the Democrat party, and asked black Americans, ‘What the hell do you have to lose?’” Trump told the crowd. “I want to share what you have to gain from voting Republican on November 3rd – the biggest election of our lives. For decades, Democrat politicians like Joe Biden have taken Black voters for granted.”

In Georgia, a reliably red state, Trump and former vice president Joe Biden are near-deadlocked, according to recent polling. A New York Times/Siena poll shows both men at 45 percent and a Monmouth poll shows Trump at 4 percent and Biden at 46 percent among all registered voters.

Trump has also struggled among Black voters, who favor Biden over Trump by an 80 percent-to-6 percent margin in a July NBC News/Wall Street Journal poll.

Trump has long made overtures to the Black community as a candidate and as president but has a dearth of Black senior staff members in his administration.

Much of his plan has already been introduced as legislation or contradicted by his own officials.

Sen. Kamala Harris, D-Calif., who is Biden’s running mate, has introduced legislation to make Juneteenth a national holiday, as well as other lawmakers from both sides. Harris’ legislation to make lynching a federal hate crime has also been repeatedly stalled by Sen. Rand Paul, R-Ky., a staunch supporter of the president.

FBI Director Christopher Wray told lawmakers earlier this month that antifa — short for “anti-fascists” — is an ideology, not an organization, which put him at odds with Trump, who has repeatedly said he would designate it a terror group. Also, following the murder of George Floyd, millions signed petitions to name the KKK a domestic terrorist group, but the plan has yet to bear fruit.

“In 2016, President Trump asked Black Americans ‘What the hell do you have to lose?’ The answer was everything,” Biden’s campaign said in a statement on Saturday. “President Trump has been in office for nearly 4 years and the results have been devastating for Black Americans. Trump lied about the danger of COVID-19 and failed to contain the virus and tens of thousands of Black Americans have lost their lives.”

“Now with 39 days to the election, Trump is making more empty promises,” the statement said. “Black voters won’t fall for it.”

'We're not putting on super-spreaders': Biden discusses his campaign plans

Joe Biden was questioned on his plans to travel across the country in the final days of the campaign and how it compares to the rallies President Trump has been holding. 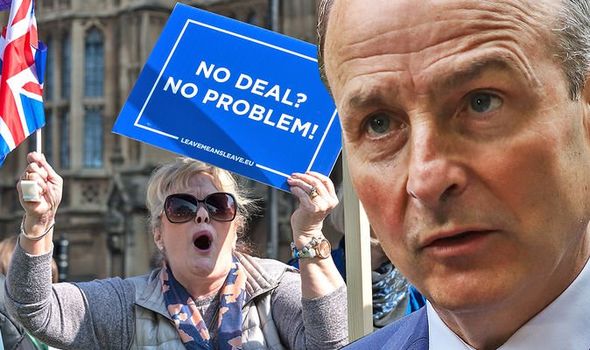 IRELAND’s Taoiseach Micheal Martin is “desperate” for the UK and the EU to strike a post-Brexit trade agreement, and if a deal fails to materialise it will confirm in the minds of many Irish voters that his Government is “jinxed”, a former top diplomat has said. Russian President Vladimir Putin said on Sunday that he saw nothing criminal in Hunter Biden’s past business ties with Ukraine or Russia, marking out his disagreement with one of Donald Trump’s attack lines in the U.S. presidential election.

Trump, who is trailing in opinion polls, has accused his Democratic challenger Joe Biden and his son Hunter of engaging in unethical practices in Ukraine. No evidence has been verified to support the allegations, and Joe Biden has called them false and discredited.

“Yes, in Ukraine he [Hunter Biden] had or maybe still has a business, I don’t know. It doesn’t concern us. It concerns the Americans and the Ukrainians,” Putin said in remarks broadcast by Russian state TV, taking the time to knock down what he made clear he regarded as false allegations from Trump about the Bidens.

“60 Minutes” host Lesley Stahl challenged Vice President Pence on President Trump’s decision to storm out of his interview with the program on Tuesday.

Trump last week released unedited footage of the interview, which aired in full Sunday night as part of a series with Trump, Joe Biden and their running mates.

“What just happened with the president?” Stahl asked Pence, who then defended Trump as “a man who speaks his mind.”

“But he walked out,” Stahl responded.

Stahl told viewers that the book, while “heavy” and “filled with executive orders” and congressional actions, did not contain a comprehensive health care plan.

President Trump is spending precious time in the final days of the 2020 campaign in places with just a single Electoral College vote at stake — a sign of just how close an election his campaign is expecting.

With nine days to go, Trump traveled Sunday to Maine, and planned to go to Nebraska on Tuesday. Unlike most states, which tend to utilize a winner-takes-all system, Maine and Nebraska divide up their Electoral College votes, giving two to the winner of the statewide vote and one vote to the winner of each congressional district.

While most of the attention this year has been on traditional battleground states like Florida and Pennsylvania, both campaigns have included Maine and Nebraska — places typically off the beaten campaign path — in their last-minute push, with the Trump team citing possible scenarios where the election could come down to one or two Electoral College votes.

Harris to campaign in Texas, but Trump won’t visit before election

Sen. Kamala Harris, D-Calif., is expected to campaign in Texas on Friday, likely making stops in Houston and in the Forth Worth area, a source familiar with the planning told NBC News.

Harris had originally planned to visit Texas last weekend but had to cancel after her communications director tested positive for Covid-19.

This news comes on the same day a Dallas Morning News/UT-Tyler poll shows Biden leading Trump in Texas 48% to 45% (within the margin of error).

Meanwhile, former Texas Gov. Rick Perry, who also served as Trump’s secretary of energy, told reporters on a campaign call that Trump would not be in Texas before Election Day.

Trump on Sunday meandered his way through a roughly 90-minute campaign speech before a rally in New Hampshire on Sunday, touching on everything from his concerns about voting in Pennsylvania to negotiations over a new Air Force One.

“We have plenty of time today,” Trump said. “Is there any football game? We don’t watch football as much anymore.”

Speaking about his recovery from Covid-19, the crowd began chanting “Super Trump.” The president suggested he may not have needed substantial medical assistance when fighting the illness.

“Maybe I didn’t need it but I’m happy I took that Regeneron,” Trump said. “Regeneron. Superman.”

The president attacked Joe Biden, at one point playing a video reel of comments Biden has made over time. But he also took aim at some of his other favorite Democratic punching bags, including his 2016 opponent Hillary Clinton, former President Barack Obama, Michigan Gov. Gretchen Whitmer, New York Gov. Andrew Cuomo and Massachusetts Sen. Elizabeth Warren.

Health policy specialists questioned White House officials’ claim that federal rules on essential workers allow Vice President Mike Pence to continue to campaign and not quarantine himself after being exposed to the coronavirus.

Campaigning is not an official duty that might fall under the guidelines meant to ensure that police, first responders and key transportation and food workers can still perform jobs that cannot be done remotely, the health experts said.

A Pence aide said Sunday that the vice president would continue to work and travel, including for campaigning, after his chief of staff and some other close contacts tested positive. Pence tested negative on Sunday and decided to keep traveling after consulting White House medical personnel, his aides said.

One technique for staying upbeat during the pandemic

'We're not putting on super-spreaders': Biden discusses his campaign plans

Commercial property prices are a risk for banks and bond investors

Stock market turbulence could last until the election, followed by a relief rally, strategists say