President Donald Trump’s decision to dispatch federal agents to cities to put down violent protests and make arrests has drawn a wave of criticism.

Senate Democrats are proposing that the next coronavirus relief package contain limits on the president’s efforts to send federal agents to patrol major cities. Lawsuits have targeted the Department of Homeland Security and other agencies by alleging that federal agents sent to Portland unlawfully detained demonstrators without probable cause.

On Tuesday, Attorney General William Barr defended the federal response to what he called the “violent rioters and anarchists” who “have hijacked legitimate protests to wreak senseless havoc and destruction.”

Any efforts by federal agents to engage in general law enforcement activities in American states, without authority from Congress, potentially violates the Constitution. On the other hand, at some point, rioting and violence can escalate beyond local law enforcement’s ability to handle it.

The framers, according to James Madison, “reserved to the … States” authority over “the internal order” and the “lives, liberties, and properties of the people.” The federal government’s authority was limited to such things as “external objects … war, peace … and foreign commerce.”

Alexander Hamilton believed “the ordinary administration of criminal and civil justice” was primarily the “province of the State governments.” The 10th Amendment, ratified during George Washington’s tenure as president, expressly reserved to the states all powers not expressly delegated to the federal government.

One wonders what Washington and Hamilton would have thought of Trump and Barr sending federal agents into cities to put down civil unrest, especially where the states and cities have made it clear they don’t want the federal help.

Actually, Washington and Hamilton would have approved. In fact, they did essentially the same thing.

The Whiskey Rebellion was a gradual uprising in rural western Pennsylvania in the early 1790s, when distillers and farmers protested a new federal whiskey tax — the first federal tax on a domestic product. In 1794, protesters surrounded the house of a tax collector, who shot into the crowd, killing one of the demonstrators and injuring others. Shortly after, some 7,000 citizens took up arms and threatened to march on Pittsburgh, taking on a system they perceived as oppressive.

Hamilton, then secretary of the Treasury, supported the use of force to put down the rebellion; Washington agreed with him. The governor and other Pennsylvania state officials met with Washington and told him federal intervention was unnecessary; state authorities could handle the riots. Washington then promptly ignored local officials, mobilized over 12,000 troops, sent them in and started making arrests.

There were differences between then and now, of course.

Washington’s “troops” were local militia, not agents employed by an executive branch agency, riding in unmarked rental cars. Also, some whiskey protesters interfered with the tax collection process and physically attacked federal “agents” — tax collectors. That arguably took a local issue and made it a federal one. It does raise the question of whether the underlying motive of larger protests should even matter for federal jurisdiction purposes.

But generally, the power to police is reserved to the states by the 10th Amendment. Federal agents are not supposed to have the general arrest powers carried by local or state officers. Federal agents’ arrest power is limited to their specific, articulated federal jurisdiction.

The FBI, for instance, cannot set up speed traps or DUI checkpoints. Their arrest power is limited to violations of federal law. It’s why Trump could issue an executive order for federal law enforcement officials to arrest a specific class of people: those who damage a monument or statue — a crime falling under federal jurisdiction.

And, other than the Reconstruction, Congress has never authorized the president to conduct general police activities in an American city. It’s certainly not likely to do so now. If the president and the attorney general want to “send in the feds,” they can only send them for a constitutional purpose: to enforce federal law or support local law enforcement.

Trump and Barr cannot dispatch federal agents to take over local law enforcement activities simply because they might think local police are doing a poor job. Federal criminal jurisdiction has expanded exponentially since the times of Hamilton and Washington, but it has not, and cannot, expand to take over the duties of local police. That is a constitutional line that the feds cannot cross.

WASHINGTON — President Donald Trump said Tuesday that he had “total confidence” in Florida’s ability to administer a vote-by-mail system in November, but he cast doubt on other states’ ability to deliver reliable results.

Trump is registered to vote in Palm Beach County, and he voted absentee in Florida’s presidential primary in March. The president has said he plans to vote absentee again in the general election.

“Over a long period of time, they’ve been able to get the absentee ballots done extremely professionally. Florida is different from other states,” Trump said Tuesday.

Trump focused on Nevada and New York — states with Democratic governors whose voters went for Hillary Clinton on 2016 — as examples of states unable to carry out voting by mail.

“I think they have to do the election in New York over,” Trump said of a closely watched Democratic congressional primary that remains undecided six weeks after the election because of disputes over some absentee ballots.

“Nobody can know what the election result is,” Trump claimed.

“In the case of Nevada, they’re going to be voting in a matter of weeks. You can’t do that. I can’t imagine the Post Office could do it. All of a sudden they’re supposed to be dealing in millions of ballots.”

The Trump administration has been criticized for implementing cost cuts at the U.S. Postal Service that have led to a backlog of mail. Republicans have also resisted Democrats’ calls to include more funding for the Postal Service in coronavirus legislation to better prepare for the November election and what is expected to be a record share of mail-in ballots.

Trump has vowed to sue to stop Nevada from mailing ballots to all active voters, although he has no legal authority to do so. Elections are administered by the states with oversight from Congress.

Although more voters are expected to cast ballots by mail this year because of the coronavirus pandemic, states have been using absentee systems for years, and millions of voters cast ballots in some way other than at in-person polling places every presidential election cycle.

As Trump continues to trail Joe Biden in polls, he has made baseless claims about the security and legitimacy of voting by mail and stoked fear over whether Americans can be confident in the November election results.

Florida, one of the most delegate-rich battleground states that could decide the presidential race, is the exception.

“Florida has done a great job, and we have total confidence that if you mail in your ballot in Florida, it’s going to matter,” Trump said.

Rep. Roger Marshall, backed by establishment Republicans, won the GOP primary for a U.S. Senate seat in Kansas, defeating former secretary of state and polarizing conservative Kris Kobach and several others in a crowded field.

The Associated Press called the race for Marshall, who was one of 11 candidates in the primary for the Senate seat being vacated by Sen. Pat Roberts, shortly before 9:10 p.m. local time.

Marshall and Kobach had been seen as the main contenders in a race that could affect control of the Senate.

Kobach, the former Republican secretary of state of Kansas who lost his bid for governor in 2018, was running with the help of a Democrat-linked group and without the blessing of GOP party leaders.

Marshall has been endorsed by Sen. Majority Leader Mitch McConnell, R-Ky., and Roberts, among other senior party leaders.

Roberts announced in January 2019 that he would not seek re-election in 2020.

Marshall on Tuesday night thanked supporters and said he was truly humbled, according to a live stream of the event on the representative’s Facebook page.

He called it a “tough, tough primary race” but said the focus should be on keeping the seat in Republican control in the general election.

“We have to be one team here,” Marshall told supporters. “And you will find that we have way more in common than what divides us.”

“I’ve always believed in this iron sharpening iron,” he said, “and boy I’ll tell you what: After this primary our swords are sharp.”

The race raised alarm among Republicans who feared that if a polarizing candidate like Kobach won the primary he could lose in November, putting their Senate majority at risk. Kobach has long been an anti immigration hawk and headed President Donald Trump’s task force on voting fraud that was disbanded in 2018.

Voters headed to the polls on Tuesday in four other states — Michigan,where freshman Democratic Rep. Rashida Tlaib faced a strong primary challenge, Arizona, Missouri and Washington — in some of the last primaries left on the year’s election calendar. 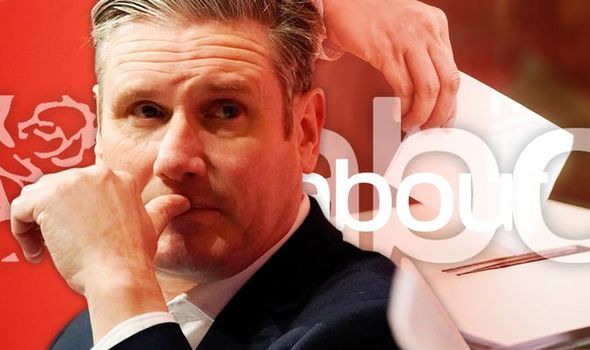 LABOUR leader Sir Kier Starmer has faced calls for a vote of no confidence from the Camden branch of left-wing organisation Momentum.

Sri Lanka goes to the polls as coronavirus risk recedes

U.S. and China set to review phase one trade deal in mid-August