The growth of the U.S. as both oil producer and exporter is helping cap a spike in crude prices following attacks on Saudi Arabian oil facilities, but the price could go sharply higher, depending on the duration of the disruption and whether it escalates into a military conflict.

The weekend attack on the Saudi Aramco’s Abqaiq processing facility and another plant knocked 5.7 million barrels of Saudi production off line and underscores a new realization of vulnerability in world oil production. That is 5% of global oil output and about half of Saudi’s production, but Saudi Arabia has sufficient supplies to maintain its current export level for about a month.

Oil prices initially spiked nearly 20% in trading Sunday evening but were up just about 14.5% in U.S. trading Monday, the biggest one-day move since Feburary, 2016. Brent was trading at $68.45 per barrel in late trading. 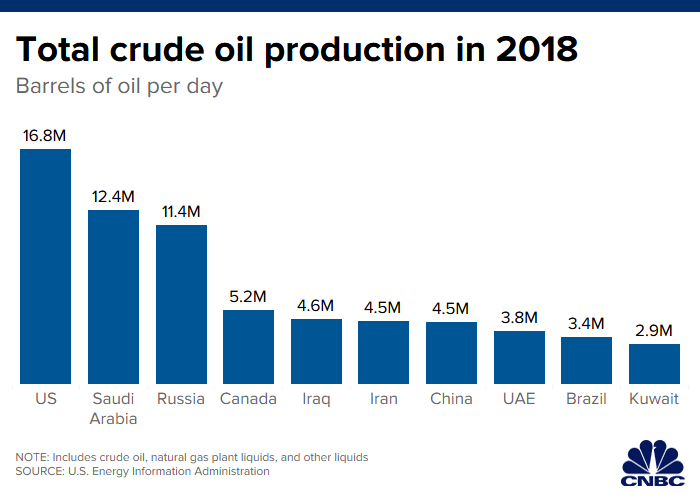 Houthi rebels, aligned with Iran, claimed responsibility for the attack, but Secretary of State Mike Pompeo said Iran was responsible.

Saudi Arabia’s foreign ministry said an investigation into the incident shows Iranian weapons were used in the attack. President Donald Trump presided over a national security meeting at the White House Monday morning on the topic of Iran, NBC News reported from sources.

Trump told reporters Monday afternoon that he was in no rush to respond to the attacks on Saudi oil facilities.

“The more we have coming from Washington and Riyadh implicating the Iranians in this attack, there may be more pressure for Washington to back words with action,” said Helima Croft, head of global commodities research. “This is one of the most strategically important energy facilities in the world. If you do nothing, are you essentially green lighting more attacks. At what point, do you need to show some deterrence?”

Iranian President Hassan Rouhani said, at a press briefing Monday, that the attack was self-defense by Houthis and a retaliatory response for Saudi attacks on Yemen.

The attack on Aramco facilities was highly sophisticated and targeted the critical processing plants that help reduce hyrdrogen sulfur in crude. There have been numerous other attacks on Saudi Arabia, as well as on oil tankers, but none has done such extensive damage.

Analysts at Goldman Sachs said a lengthier outage could result in a sharp jump in crude prices. For instance, if the current level of production remained down for more than six weeks, there could be a quick rally in Brent to $75 per barrel, they said in a note. Brent is the international bench mark and traditionally has been more sensitive to events in the middle east.

Singh said Brent could reach $75 if the outage is extended, and in about three weeks the Saudi oil supplies would begin to run low. “If it takes that long you’ll really start seeing another leg up,” he said.

The Barclays analyst said the market has been responding to the worries of slowing economic activity from the trade war, and he said the market was already heading towards a deficit.

“What’s incremental [for oil prices] is this attack and what’s unknown is how long it’s going to take to restore production. The other unknown is what kind of escalation is going to happen here,” he said.

But oil could go even higher, depending on whether there are further attacks or a military response from Saudi Arabia, the U.S. or others. “If this escalates into a hot war, you’re looking on a $100 oil,” said John Kilduff of Again Capital.

He noted that Saudi Arabia is calling on the United Nations to investigate the attacks.

“You don’t get the sense there’s a rush to war, as spectacular as this attack was,” said Kilduff.

For now, both U.S. West Texas Intermediate and Brent futures are trading at levels last seen in May, and have broken slightly above a range they were trapped in all summer. WTI futures settled up 14.8% at $62.90 per barrel, its best day since December, 2008.

A conflict in the Middle East could have driven oil to $200 a barrel five years ago. “If you add a war to this, maybe you would have $100,” she said.

The pressure is also on Saudi Arabia Crown Prince Mohammed bin Salman to take action. The prince, known as MBS, is in charge of Saudi Arabia’s military and leads the war in Yemen. He also is driving the kingdom’s diversification effort away from oil. The anticipated initial public offering of Aramco is a big part of that effort though some analysts said it may now be delayed.

“If they don’t do anything, they’re going to look really weak,” said Kilduff.

Croft, in an earlier note, said MBS has shown more willingness to confront the Iranians and their proxies than previous Saudi leaders.

“At a minimum, we would expect to see stepped-up Saudi bombings on Houthi targets in Yemen, but one cannot rule out a more direct retaliation on Iran if the attacks continue at the current pace,” she noted.

The U.S. said it would consider tapping its strategic oil reserves to make up for lost supply, but U.S. Energy Secretary Rick Perry said it would be premature to do so at this point.

Analysts have already been expecting the U.S. to add more export capacity. Pipelines to take crude from the Permian basin to the Gulf Coast have just come on line, and more are to follow.

The U.S. is currently importing very little Saudi oil, and imports now are about 500,000 barrels a day.

“There’s actually a silver lining, if you will, to this story in the sense that had this happened five year ago, it could have absolutely brought the global economy to its knees. Today, we’re concerned about it. We need to address it, but it’s not anywhere near as devastating as it would have been five years ago,” Energy Secretary Rick Perry told CNBC.

The U.S. in the past year has become the world’s largest oil producer, ahead of both Saudi Arabia and Russia. OPEC and Russia have had an agreement to reduce production in an attempt to prop up world oil prices, which have been soft on worries about weakening demand growth.