Many global investors are turning toward Silicon Valley instead of Wall Street in search of returns.

The total invested in private markets hit all-time highs last year and continues to break multi-decade records this year. In the first half of the year, total investments in venture capital hit a 19-year high of $53.3 billion, according to data from Refinitiv published last week. That marked a 21% increase by total dollar amount compared to the first half of 2018.

The steady stream of funding comes alongside a drop in the number of publicly listed companies, rock-bottom global bond yields, and historically weak small-cap performance.

Analysts say the trend is largely the result of relatively lower expectations for Wall Street investments such as stocks or bonds. As the trade war between the U.S. and China escalates and economic indicators weaken, investors have fled to safer assets such as Treasurys. The 10-year Treasury note fell below 1.7% Monday.

Money managers for pensions and endowments are turning to alternative investments — private equity, venture capital or hedge funds – to “keep up with expectations that they set years ago with their stakeholders,” according to McKinsey Partner Bryce Klempner.

“In a world where big institutional investors find themselves starved for returns, it’s not surprising that they have steadily increased allocations to private markets and you’ve seen capital continuing to flow into the asset class,” Klempner told CNBC in a phone interview. “Private equity has, on average, managed to outperform public markets over the last couple of decades.”

Growth in smaller public companies has been significantly slower than their private-market counterparts. PitchBook looked at the valuations of late-stage, Series D funded companies compared to the small-cap benchmark Russell 2000. That index is in correction territory, trading nearly 14% below its 52-week intraday high in August of 2018. The S&P 500 is off by 4% from its high. 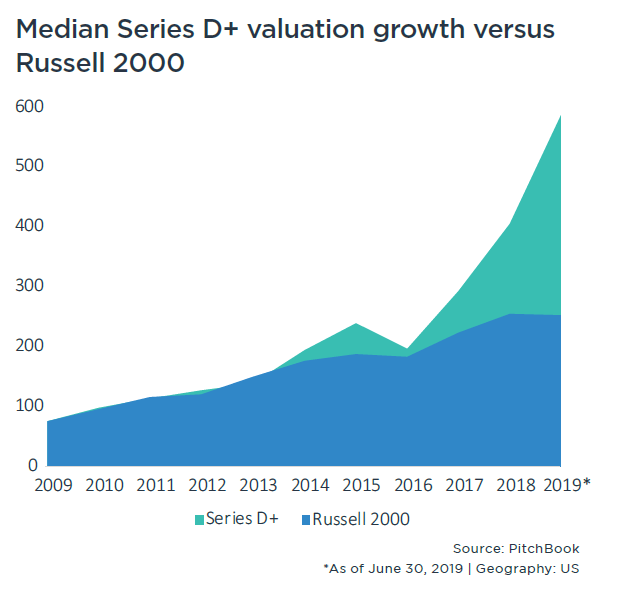 Meanwhile, there has also been a contraction in the total number of public companies. Part of that is due to mergers and consolidation, but Klempner said managers — not just investors — tend to prefer private ownership, too. They’re able to operate “outside of the quarterly spotlight or the glare of public markets,” and often take a longer-term view, he said.

One factor allowing companies to stay private was a change in legislation. The 2012 JOBS Act raised the limit of private shareholders in a company from 500 to 2,000 – meaning companies can stay private until they reach that limit. And in many ways, companies don’t need to go public: They can raise money with ease from private investors and don’t need the cash injection that comes with an initial public offering.

Foreign investors are also looking for early entrance into quickly growing tech companies, which in the case of Uber and WeWork, stayed off of public stock exchanges for a decade. Last year, venture capital deals that included “tourist” investors soared to more than $45 billion over 102 investments. Halfway through 2019, the deal total was at 53. 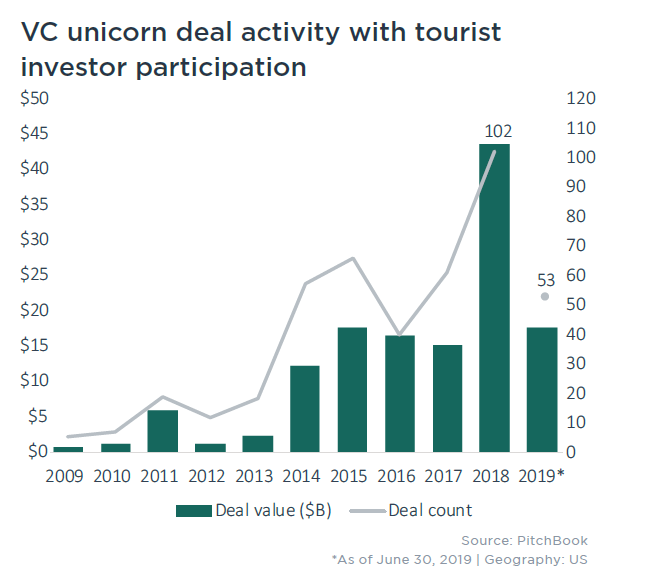 Another factor fueling the growth in private equity is acceptance and usage of secondary markets for investors to get liquidity. In traditional stock markets, it’s easier to buy and sell your stake with the click of a button or calling your broker. And there are plenty of buyers on the other side.

With private markets, that’s not always the case. Private companies aren’t listed on exchanges, meaning finding a buyer isn’t as seamless since alternative assets are mostly off limits unless you’re a qualified, or accredited investor.

“It’s important to emphasize that multiple companies are now increasingly comfortable buying and selling the securities of large, privately held companies in private transactions at the scale of billions of dollars,” PitchBook’s Black said in the report.

McKinsey’s Klempner called it a snowball effect. As secondary markets get deeper, the extent of the discount investors would need to sell a stake in a privately owned company is much less painful than it was a few years ago.

“For a long time, some investors were relatively wary of private markets because of the perceived illiquidity of those asset classes,” he said.

Despite the shift, Klempner highlighted the sheer size of public markets — $70 trillion, versus roughly $3 trillion to $3.5 in total assets under management for private equity — as a sign that stock markets are here to stay.

Still, some analysts have pointed to potential negative effects in the shift to private markets. There is potential for less liquidity in public markets, causing more volatility, and retail investors may have fewer high-growth opportunities as companies opt out of listing on exchanges.

“It throws a spotlight on the resilience of the liquidity of public markets and even questions the point of a public stock market,” Bernstein senior analyst Inigo Fraser-Jenkins said in a note to clients in May. “Soon, active investing is going to be mainly in private markets.”

Fraser-Jenkins also highlighted the difficulty of the average stock market investor to get exposure to high-growth companies until they list on public exchanges.

“This should be a concern for policymakers, as the public equity market allows for democratized access to investment vehicles in a way that private assets do not,” Bernstein’s Fraser-Jenkins said.

“The root cause of all these problems and issues is that the U.S. does not want to see rapid development and rejuvenation of China, still less would they want to accept the success of a socialist country, but that is not fair, China has the right to develop,” Wang said during a discussion at the Munich Security Conference.

“China’s drive towards modernization is an inevitable trend of history and will not be held back or stopped by any force in the world because it represents the direction of human progress,” he added.

Wang’s comments at the Munich Security Conference followed those of Secretary of State Mike Pompeo and Secretary of Defense Mark Esper, both delivering back-to-back speeches accusing China of malign activities.

“China encroaches on the exclusive economic zones of Vietnam, the Philippines, and Indonesia. And on that point, China has had a border or maritime dispute with nearly every nation bordering it,” Pompeo told an audience at the security forum. “And let’s talk for a second about the other realm, cybersecurity. Huawei and other Chinese state-backed tech companies are Trojan horses for Chinese intelligence,” he added.

Esper said Beijing was caring out a “nefarious strategy” through telecommunications firm Huawei. “It is essential that we as an international community wake up to the challenges presented by Chinese manipulation of the long-standing international rules-based order,” he warned.

When asked about the speeches made by Pompeo and Esper, Wang dismissed U.S. criticisms and said that Beijing would continue to seek a better relationship with Washington.

“This has become a common scenario, they say basically the same thing everywhere they go about China, and I don’t want to waste our time responding to each and every thing they’ve said. The thing I want to say is that all these accusations against China are lies and not based on facts,” Wang said of Pompeo and Esper’s comments.

“The most important task for China and the U.S. is to sit down together, have a serious dialogue and find a way for two major countries with different social systems to live in harmony and interact in peace. China is ready and we hope the U.S. will work with us in the same direction,” he added.

Excited passengers disembark from the MS Westerdam, which is now docked in Sihanoukville, Cambodia. The cruise ship arrived in Cambodia on February 14, 2020 after being stranded for two weeks

This is a live blog. Please check back for updates.

All times below are in U.S. Eastern Standard Time.

China’s National Health Commission reported that there were 2,009 new confirmed cases of the coronavirus and 142 additional deaths as of Feb. 15. The total number of cases in mainland China has reached 68,500, and the total deaths has reached 1,665, according the latest statistics from the commission on Sunday.

6:21 am: Taiwan confirms death of man with no known history of travel to China

Taiwan said a man in his 60s with a history of hepatitis B and diabetes has died of the virus. It’s the first death on the island. The man died Saturday after nearly two weeks in a hospital, but does not have a known history of traveling to China.

Health officials are investigating how he became infected. Taiwan has 20 confirmed cases of the virus.

3:40 am: American from cruise ship tests positive for second time in Malaysia

An 83-year-old American woman who was previously aboard the MS Westerdam cruise ship in Cambodia last week has tested positive for the virus a second time since flying back to Malaysia, officials there said on Sunday. She was one of 2,257 passengers and crew onboard at sea for nearly 14 days, and the first to test positive for the virus.

Officials said that more than 140 of the passengers on the ship traveled through Malaysia’s Kuala Lumpur airport, and all but eight traveled on to destinations in the U.S., Europe and Australia.

A fighter loyal to Libya’s U.N.-backed government (GNA) gestures during a clash with forces loyal to Khalifa Haftar at the outskirts of Tripoli, Libya May 21, 2019.

Violations of an arms embargo in Libya have become a joke and it is imperative that those who breach it are held to account, a senior U.N. official said on Sunday.

“The arms embargo has become a become a joke, we all really need to step up here,” U.N. Deputy Special Representative to Libya Stephanie Williams told a news conference in Munich.

“It’s complicated because there are violations by land, sea and air, but it needs to be monitored and there needs to be accountability.”