Sen. Elizabeth Warren, D-Mass., on Thursday reintroduced the Refund Equality Act, a bill that would allow same-sex couples to amend past tax returns and receive refunds from the IRS.

“The federal government forced legally married same-sex couples in Massachusetts to file as individuals and pay more in taxes for almost a decade,” Warren said in a statement. “We need to call out that discrimination and to make it right — Congress should pass the Refund Equality Act immediately.”

A report by the Joint Committee on Taxation released Tuesday estimated that taxpayers who were in same-sex marriages prior to the repeal of the Defense of Marriage Act in 2013 would be eligible for up to $57 million in refunds. Warren introduced a version of the bill in 2017.

Same-sex couples in nearly 10 states were permitted to legally marry on the state level prior to the Supreme Court’s 2013 United States v. Windsor decision, which struck down the Defense of Marriage Act and permitted these couples to file joint federal tax returns.

At the time, the IRS said same-sex married couples could file amendments to their tax returns for the previous three years — the same amount of time for opposite-sex couples. However, gay couples in several states, including Warren’s home state of Massachusetts, had been legally married for more than three years before the Windsor decision.

Last week, Rep. Judy Chu, D-Calif., introduced a companion bill in the House called the PRIDE Act of 2019. In an interview with NBC News, Chu said she thinks her bill might pick up some Republican support, particularly because several GOP representatives voted for the Equality Act, a bill passed by the House that would modify existing civil rights legislation to add “sexual orientation” and “gender identity” to the list of protected classes, along with race, religion, color, sex, etc.

“After all, there are Democratic LGBT members and there are Republican LGBT couples, so they exist everywhere,” Chu said. “It is only right that we change this tax code to make it fairer for all.”

“I have hope that it could move, perhaps in a bigger bill, in which there could be a win-win for all sides on various issues,” she added.

The PRIDE Act of 2019 is scheduled to be marked up Thursday morning by the House Ways and Means Committee.

Tim Fitzsimons reports on LGBTQ news for NBC Out.

‘Iran made a very big mistake!’ 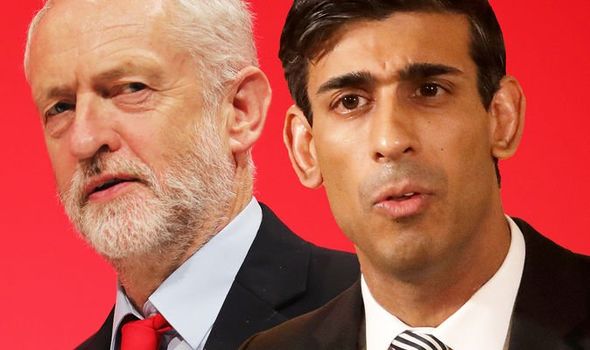 JEREMY CORBYN has been left red-faced after ‘red wall’ voters in the north of England heaped praise on Rishi Sunak after the Chancellor’s interventions to help the UK out of the economic crisis likely to be caused by the coronavirus pandemic.

President Donald Trump assailed a pair of Supreme Court rulings on Thursday pertaining to his personal financial records in a Twitter rant that called the decisions “not fair.”

In a rambling series of tweets, Trump attacked Democrats and his predecessor former President Barack Obama, arguing he is being unfairly targeted while others don’t face scrutiny.

The decisions were not a clear-cut loss for Trump, who is unlikely to be forced into disclosing his tax returns before voters weigh his reelection bid in November, but the court also refused to side with his argument that the presidency offers him protection from investigation.

“This is all a political prosecution” Trump tweeted. “I won the Mueller Witch Hunt, and others, and now I have to keep fighting in a politically corrupt New York. Not fair to this Presidency or Administration!”

“Courts in the past have given ‘broad deference,'” he added. “BUT NOT ME!”

The tweets came after the Supreme Court ruled in a 7-2 decision — in which the majority was joined by Trump-appointed Justices Neil Gorsuch and Brett Kavanaugh — that the president is not immune from the Manhattan District Attorney’s efforts to obtain his taxes as part of an investigation into hush payments to two women. In another 7-2 decision, the court also left open the potential for House Democrats to obtain his financial records from the Trump Organization’s accounting firm and two banks.

Trump waged a coast-to-coast legal battle to keep his tax information private in the months leading up to Thursday’s Supreme Court rulings. While presidential candidates have traditionally released his or her tax returns over the past few decades, it is not required by law, and though he said he would make public the information during his 2016 run, Trump ultimately became the first major-party nominee in four decades to not do so.

The cases will now return to lower courts and the rulings do not mean the president’s tax information will become public imminently. It’s unlikely the cases will be settled before Election Day this coming November.

The president, however, unloaded on the high court in a subsequent tweetstorm.

“This is about PROSECUTORIAL MISCONDUCT,” he added.

In the majority ruling on Manhattan District Attorney Cy Vance’s efforts to obtain the documents, Chief Justice John Roberts wrote that in the U.S. judicial system, “the public has a right to every man’s evidence.”

“Two hundred years ago, a great jurist of our Court established that no citizen, not even the president, is categorically above the common duty to produce evidence when called upon in a criminal proceeding,” he said. “We reaffirm that principle today.”

Roberts said the court could not accept Trump’s argument that he holds absolute immunity from criminal investigation as president. Roberts said Trump still enjoys the same protections as any other citizen, “including the right to challenge the subpoena on any grounds permitted by state law, which usually include bad faith and undue burden or breadth.”

The Supreme Court had unanimously ruled decades ago that presidents are not beyond the reach of the Judiciary while in office in a pair cases involving former Presidents Richard Nixon and Bill Clinton.

Attorneys representing Trump had argued in the New York case that a sitting president cannot be criminally investigated even if he were to shoot someone in the middle of 5th Avenue in New York City. In the case involving congressional oversight, Trump’s team argued that Congress can only issue a subpoena for a legitimate legislative purpose.

As for why he hasn’t made his returns public like predecessors and rivals, Trump has cited ongoing audits — which take place annually as president — as reason to keep the documents secret.

“We are pleased that in the decisions issued today, the Supreme Court has temporarily blocked both Congress and New York prosecutors from obtaining the president’s financial records,” Trump attorney Jay Sekulow said in a statement. “We will now proceed to raise additional Constitutional and legal issues in the lower courts.”

Vance called the ruling “a tremendous victory for our nation’s system of justice and its founding principle that no one – not even a president – is above the law.”

“Our investigation, which was delayed for almost a year by this lawsuit, will resume, guided as always by the grand jury’s solemn obligation to follow the law and the facts, wherever they may lead,” he added.

“The Court has reaffirmed the Congress’s authority to conduct oversight on behalf of the American people, as it asks for further information from the Congress,” she added.

Biden, the presumptive 2020 Democratic presidential nominee, renewed his call for Trump to release his tax records, pointing to his own disclosure of 21 years worth of returns.

House Oversight Committee Chairwoman Carolyn Maloney, D-N.Y., said the rulings “reaffirm a bedrock principle in our democracy: no one — not even the president — is above the law.”

“I am disappointed that the court remanded our case to the lower court for a review under a new standard for subpoenas for presidential papers, but I am confident our committee ultimately will prevail,” she added.

“We remain confident that we will ultimately prevail,” he said. “And in light of the president’s tweets this morning, he appears to believe the same.”

Meanwhile, Rep. Jim Jordan, R-Ohio and the top Republican on the House Judiciary Committee, said in a statement that the rulings “sadly will not end the Democrats’ partisan obsession.”

“Americans around the country deserve better than the Democrats’ never-ending political games,” he said.

And Rep. James Comer, R-Ky. and the top Republican on the House Oversight Committee, said the Supreme Court ruling pertaining to congressional oversight will allow for the House to “stop wasting time and money on political escapades that help no Americans but serve solely to help Democrats maintain their grip on power.”