Mark Janus has worked for years as an Illinois state employee, and pays about $550 annually to the powerful public-sector union known as AFSCME.

While not a member of the union, he is required under state law to hand over a weekly portion of his paycheck – which he says is a violation of his constitutional rights.

“I work for Health and Family Services, and I’m forced to pay money to a union that then supports political causes that I don’t agree with,” Janus told Fox News.

Now, Janus’ free-speech fight is before the Supreme Court, which holds arguments in the appeal on Monday. And the political and financial stakes are huge for the broader American labor union movement, which already has begun sounding the alarm about the consequences should the justices rule for Janus.

‘I just look at it as an average guy just standing up for his own rights of free speech.’

“Unions would lose resources, contracts would become weaker, and the membership would become divided,” said John Scearcy, secretary-treasurer of Teamsters Local 117, representing 16,000 workers in Washington state. “There is a strong likelihood that your voice as a public sector union member could be significantly weakened.”

The high court is being asked to overturn its four-decade-old ruling over so-called “fair share” fees, allowing states to require government employees to pay money supporting collective bargaining and other union activities – whether they join the union or not.

While the current case applies only to state employees, the repercussions could affect unions nationwide.

The Supreme Court had deadlocked when the issue was revisited two years ago, just after Justice Antonin Scalia died suddenly.

His Trump-picked replacement, however, is expected to be the deciding vote this time around.

“If we’re going to pick and choose cases out of 2,700, I can point you to so many in which I have found for the plaintiff in an employment action, or affirmed the finding of an agency of some sort — for the worker,” he told Democratic Sen. Richard Durbin, who is from Janus’ home state and supports the unions in this case.

While Gorsuch seeks to keep court watchers guessing, Trump’s Justice Department has been clear on its position – announcing in December it was reversing course from the previous administration and supporting Janus.

“The [Obama-led] government’s previous briefs gave insufficient weight to the First Amendment interest of public employees in declining to fund speech on contested matters of public policy,” said U.S. Solicitor General Noel Francisco, in a note to the high court.

Janus, 65, says he does not want to destroy the unions and thinks workers have a right to organize. But he opposes having to pay for a union’s lobbying efforts at a time when Illinois is facing a crippling financial crisis.

He is being represented by the Chicago-based Liberty Justice Center.

“In many states, workers are forced to give money to a union whether they want to or not. And when they do that they’re funding union politics,” said Jacob Huebert, the group’s director of litigation. “Not all workers want to support that union agenda, just because they’ve taken a government job.”

Labor leaders oppose so-called “free riding” by workers like Janus, and say they have a legal duty to advocate for all employees:

“Everybody deserves the power to win better wages and benefits and retirement security whether you’re in a union or not in a union. That’s how we build an economy that works for everyone,” said Richard Trumka, president of the AFL-CIO.

About 28 states have so-called “right-to-work laws” that prohibit or limit union security agreements between companies and workers’ unions.

States that do allow “fair share” fees say they go to a variety of activities that benefit all workers, whether are in the union or not. That includes collective bargaining for wage and benefit increases, grievance procedures, and workplace safety.

Employees who do not join a union also do not have to pay for a union’s “political” activities, but both sides of the issue are at odds over when that would occur.

Court watchers say the legal and political stakes in the Janus case could well determine the future of the union movement.

“I think people who are in public sector unions are very concerned about their viability going forward. Certainly opponents of unions see this case as something that they hope will substantially diminish the power of labor,” said Elizabeth Wydra, president of The Constitutional Accountability Center. “But make no mistake, this case is a very serious potential blow to the union movement.”

As for Janus, he downplays his role as a potential constitutional gamechanger.

“I just look at it as an average guy just standing up for his own rights of free speech,” he said. “I’d kind of like my money instead of going to the union and their causes go toward more civic health such as Boy Scouts, Girl Scouts. There are so many causes that need help and assistance.”

'B*******!' Boris fires some rather unparliamentary language at Corbyn after PMQs jibe

WASHINGTON — President-elect Joe Biden announced new members of his science team on Saturday as well as his plan to elevate the director of the Office of Science and Technology Policy to a Cabinet-level position for the first time, a move meant to highlight his commitment to science.

“We’re going to lead with science and truth,” Biden said at a speech introducing his new appointees in Delaware on Saturday. “We believe in both.”

Biden nominated Eric Lander to the position. Lander, who will require Senate confirmation, is a mathematician and geneticist who helped map the human genome and founded the Broad Institute, a biomedical research center known for their work on the gene-editing technology CRISPR-Cas9.

Lander is also a biology professor at the Massachusetts Institute of Technology and Harvard Medical School and previously served on President Barack Obama’s council of science advisers.

The decision to elevate Lander to Cabinet-level is a sharp break from President Donald Trump who spent much of his term downplaying and second-guessing health and science experts. The position Lander will fill sat vacant for nearly two years under Trump.

Dr. Francis Collins will stay on as Director of the National Institutes of Health.

Vice President-elect Kamala Harris, whose mother was a scientist, said that she grew up with a fundamental belief in collecting data and making decisions “based on evidence.”

Biden said his science team will focus on five key areas: the coronavirus pandemic, the economy, the climate crisis, industry technology advancements and the long-term health of science and tech in the country.

Biden, who lost a son to cancer, said that ending the disease will also be a top priority for his administration and it would be a signature issue for incoming first lady Dr. Jill Biden.

“When I announced that I would not run for president in 2015, I said that I had only one regret  —  that I wouldn’t be the president who presided over the end of cancer as we know it,” Biden said. “As president, I will do everything we can to get it done.”

Federal prisons on lockdown in run-up to Biden inauguration NEW YORK — All federal prisons in the United States have been placed on lockdown, with officials aiming to quell any potential violence that could arise behind bars as law enforcement prepares for potentially violent protests across the country in the run-up to President-elect Joe Biden’s inauguration on Wednesday.

The lockdown at more than 120 federal Bureau of Prisons facilities took effect at 12 a.m. Saturday, according to an email to employees from the president of the union representing federal correctional officers.

“In light of current events occurring around the country, and out of an abundance of caution, the decision has been made to secure all institutions,” the Bureau of Prisons said in a statement.

The lockdown decision is precautionary, no specific information led to it and it is not in response to any significant events occurring inside facilities, the bureau said.

To avoid backlash from inmates, the lockdown was not announced until after they were locked in their cells Friday evening.

Shane Fausey, the president of the Council of Prison Locals, wrote in his email to staff that inmates should still be given access in small groups to showers, phones and email and can still be involved in preparing food and performing basic maintenance.

Messages seeking comment were left with Fausey on Saturday.

The agency last put in place a nationwide lockdown in April to combat the spread of the coronavirus.

During a lockdown, inmates are kept in their cells most of the day and visiting is canceled. Because of coronavirus, social visits only resumed in October, but many facilities have canceled them again as infections spiked.

One reason for the new nationwide lockdown is that the bureau is moving some of its Special Operations Response Teams from prison facilities to Washington, D.C., to bolster security after President Donald Trump’s supporters stormed the U.S. Capitol on Jan. 6. Authorities are concerned there could be more violence, not only in the nation’s capital, but also at state capitals, before Trump leaves office Jan. 20.

A Bureau of Prisons spokesman said the agency was coordinating with officials at the Justice Department to be ready to deploy as needed. Earlier this month, about 100 officers were sent to the Justice Department’s headquarters to supplement security staff and were deputized by the U.S. Marshals Service and given special legal powers to “enforce federal criminal statutes and protect federal property and personnel,” said the spokesman, Justin Long.

The specialized units typically respond to disturbances and other emergencies at prisons, such as riots, assaults, escapes and escape attempts, and hostage situations. Their absence can leave gaps in a prison’s emergency response and put remaining staff at risk.

“The things that happen outside the walls could affect those working behind the walls,” Aaron McGlothin, a local union president at a federal prison in California.

As the pandemic continues to menace federal inmates and staff, a federal lockup in Mendota, California, is also dealing with a possible case of tuberculosis.

According to an email to staff Friday, an inmate at the medium-security facility has been placed in a negative pressure room after returning a positive skin test and an X-ray that indicated an active case of tuberculosis.

The inmate was not showing symptoms of the lung disease and is undergoing further testing to confirm a diagnosis, the email said.

As a precaution, all other inmates on the affected inmate’s unit were placed on quarantine status and given skin tests for tuberculosis.

The bacterial disease is spread similarly to Covid-19, through droplets that an infected person expels by coughing, sneezing or through other activities such as singing and talking.

As of Wednesday, the last day for which data was available, there were 4,718 federal inmates and 2,049 Bureau of Prisons staff members with current positive tests for Covid-19.

Since the first case was reported in March, 38,535 inmates and 3,553 staff have recovered from the virus. So far, 190 federal inmates and 3 staff members have died. 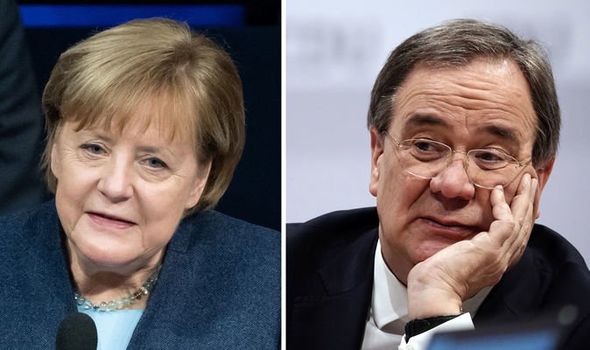 ANGELA Merkel’s probable replacement as Germany’s leader – sometimes referred to as ‘mini-Merkel’ in recognition of his close ties with the departing Chancellor – is likely to pursue policies which will drive more of the EU27 to consider following the UK out of the bloc, a former MEP has said.

Federal prisons on lockdown in run-up to Biden inauguration

Thank God we are out! MEPs explode as Turkey’s Erdogan begs to join Brussels bloc