The first confirmation hearing for one of President-elect Joe Biden’s crucial cabinet posts has been abruptly rescheduled, the ranking members of the Senate Intelligence Committee said on Thursday.

Biden announced in November that Avril Haines, who held top national security jobs under former President Barack Obama, would become his director of national intelligence in his administration. The virtual hearing was scheduled for Friday but was postponed.

A Republican Senate aide told NBC News that there is no rescheduled date yet for the postponed hearing, but the delay occurred in part because members wanted to be able to attend in person. The aide said they do not expect this to “significantly delay the confirmation process.” Another aide said the Senate hopes to hold the hearing on Tuesday.

Having served under Obama as a national security lawyer and deputy CIA director, Haines, 51, has been playing a key national security role in the Biden transition. She will become the first woman in the DNI job, which was created after the Sept. 11, 2001, terrorist attacks to better coordinate the sprawling American intelligence bureaucracy.

Sen. Marco Rubio, R-Fla., who is the acting chair of the Senate intelligence committee, and Sen. Mark Warner, D-Va., the vice-chair, said in a joint statement on Thursday that the panel is working in “good faith” to have a confirmation hearing.

“Despite the unusual circumstances on Capitol Hill, the committee is working in good faith to move this nominee as fast as possible and ensure the committee’s members have an opportunity to question the nominee in both open and closed settings,” the lawmakers said.

“The Director of National Intelligence plays a crucial role in overseeing the 18 agencies that make up our nation’s Intelligence Community, and the committee looks forward to holding a hearing next week with Ms. Haines.”

Some Democrats in Congress are worried their colleagues might kill them

Evo vs. Eva? Ahead of Bolivia regional elections, young candidates are in the spotlight LA PAZ — In the Bolivian city of El Alto that clings to vertiginous mountain peaks soaring above political capital La Paz, the country’s ruling socialist party faces a reckoning in regional elections to be held on Sunday.

The socialist candidate for mayor, hand picked by party grandee and former President Evo Morales, is far behind in opinion polls. The likely winner: Eva Copa, a former party star — young, female and Indigenous — pushed out of the party for being too moderate.

Morales made a triumphant return to Bolivia last year when his Movement for Socialism (MAS) party swept back into power, his close ally and former minister Luis Arce elected as president.

But increasingly Bolivian voters, even in MAS strongholds, are looking towards a new generation of politicians, beyond the shadow of ‘Evo,’ who led the country for almost 14 years until his ouster in 2019 amid allegations that he had stolen an election.

In the wake of Morales’ departure, when he fled to Mexico and then Argentina, violent protests broke out around the country. In El Alto around a dozen people — mostly his supporters — were killed in skirmishes with police.

“I suffered what they suffered and we have been together in very hard times,” Copa, 34, the mayoral candidate for the little-known Jallalla party told Reuters as she campaigned in the city. “I am young, I am a woman, I know what they feel.”

“The renewal is not only about age, the renewal is to bring new faces to politics, to make a good foundation and build on it,” said Copa, who previously headed the country’s Senate.

On Sunday, Bolivians will elect some 5,000 officials, from governors and mayors to assembly members, councilors and indigenous representatives.

A bill to pay

During the tempestuous months of protest in 2019, Morales supporters often marched down the steep highways from El Alto into La Paz, waving the rainbow-colored Wiphala flag, a symbol of the indigenous groups of the Andes he had so often championed.

While Morales alleged a coup against him, Copa, then Senate leader, took a more conciliatory line with the conservative interim government, which won her wide plaudits for calming the violence but caused tensions with leaders within her party.

So, instead of Copa, Morales pushed his own candidate for El Alto mayor – Zacarias Maquera.

Local opinion polls ahead of Sunday’s vote suggest Maquera has just 8% of support. Copa, meanwhile, has around 90%.

Morales on a recent campaign tour to support his candidate said that he was confident the people and the “cultural democratic revolution” would keep the MAS socialist party “the first political force, as we have been until now.”

But in many towns and cities across the country, there have been reports of internal party strife, as the MAS rank-and-file have rejected Morales and the candidates he has backed. Polls suggest opposition candidates are doing well.

“The biggest bill that Evo Morales is going to have to pay is that of El Alto, and of Eva Copa,” he said.

Many voters point the blame for the weak showing of the MAS candidate at Morales, saying the former coca grower was losing his famous touch with the common man.

“I believe that Evo Morales is directly responsible because he did not listen to his grassroots when choosing a representative for the mayor’s office,” said Jaime Copa, a 45-year-old bricklayer, adding he would support Eva Copa.

Víctor Mayta, a 22-year-old university student, also felt Morales had gone in the wrong direction. “I support Copa for fighting for her ideals,” he said. 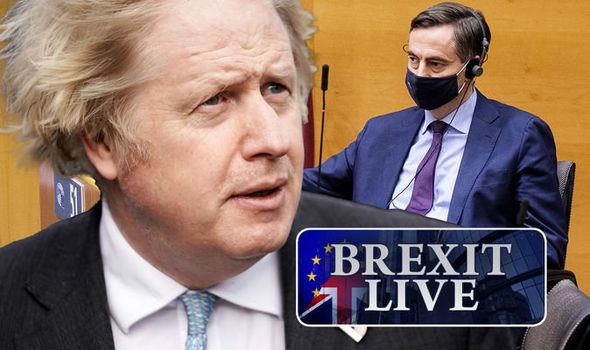 BORIS JOHNSON has been warned he should obey EU rules, with one German MEP saying the UK was on a “slippery slope” over the Northern Ireland row.

NBC’s Pete Williams reports that a former State Department aide who served during the Trump administration has been arrested in connection with the Capitol riot.March 5, 2021

Evo vs. Eva? Ahead of Bolivia regional elections, young candidates are in the spotlight

Robinhood chooses the Nasdaq for its IPO, sources say